The official gold coin of the United States, the American Gold Eagle coins are available on an annual basis in three familiar versions and four different weights. These stunning coins serve as a reminder of the majesty, longevity, and strength of the American nation. Each Gold Eagle coin from the United States Mint features images of the nation’s most iconic symbols, from its official national emblem of the American bald eagle to that towering symbol of freedom and democracy known to most simply as Lady Liberty.

The History of the American Gold Eagle

American Gold Eagle Coins were authorized for production by the United States Congress with passage of the Gold Bullion Coin Act of 1985. Under the terms of legislation, the program was to contain four different weights in total (1 oz, ½ oz, ¼ oz, 1/10 oz) and include two different versions initially (bullion and proof). Congress set the face value for the coins as is standard practice with any legal tender issued by the United States Mint.

The first American Gold Eagle coins were produced and made available for purchase in 1986. The bullion gold coin program was immediately available with all four weights, while the proof version of the coin featured only a 1 oz coin in 1986. The proof program expanded to include the ½ oz weight in 1987, and the ¼ oz and 1/10 oz coins in 1988.

For the 20th anniversary of the American Eagle coin series, which includes the Silver Eagle, in 2006, the United States Mint introduced a new burnished version of the coin. The Burnished American Gold Eagle was introduced specifically for coin collectors. Although the United States Mint already had the proof version of the Gold Eagle available for collectors, the burnished version of the coin had a unique minting process that gave it enhanced value for those numismatists interested in the display and exhibition of visually brilliant coins.

The United States Mint chose a historic American coinage design for the American Gold Eagle. Augustus Saint-Gaudens was hand-picked by President Theodore Roosevelt in 1905 to help revitalize US gold coinage with a brilliant new design.

Saint-Gaudens crowning achievement was the Lady Liberty design that features Liberty in full-length figure, her hair and robe flowing freely in the breeze as she strides forward confidently from the nation’s capital. In her right and left hand are a torch for light, and an olive branch signifying peace; all the things she’ll need to guide the nation toward a peaceful, if unknown, future.

His original design was used on the $20 Gold Double Eagle coin. In circulation from 1907 to 1933, it is considered the finest design on the greatest coin in American history. Saint-Gaudens himself never lived to see his design come to fruition on an American coin though, passing away due to complications from illness just months before the coins were released in 1907.

In Saint-Gaudens’ original design, Liberty was featured striding forward with the US Capitol Building at her feet, the rays of the setting sun at her back, and 46 stars surrounding her along the coin’s rim. In 1912, Congress authorized the addition of two stars to his design to recognize the addition of New Mexico and Arizona to the Union. In order for the image to be used on the American Gold Eagle, two stars were added to recognize the post-World War II addition of Hawaii and Alaska to the Union.

The reverse side of the coin features a family of nesting bald eagles, and was designed by Miley Busiek. In the image, a male bald eagle returns to the nest with branches in its talons. In the nest, a female is depicted standing vigilant guard over the young hatchlings in the nest. Busiek’s design was created in 1986, and is used exclusively on the American Gold Eagle.

To mark the 35th anniversary of the American Gold Eagle, the United States Mint offers a brand-new design on the reverse field of the coins for the first time in the history of the collection. Created by US Mint Artistic Infusion Program Artist Jennie Norris, the new design for the reverse features the following elements:

Jennie Norris is the designer of note whose artwork was chosen from a group of more than 34 designs to be the new face of the collection. Ms. Norris has a background as a professional graphic designer, illustrator, and award-winning artist. Her works have featured in the gift and stationery industry, as well as other retail products for the likes of Crayola, Sea World, Hasbro, Hershey, JoAnn Stores, Target, and Costco. In this particular design, Ms. Norris drew on her years of experience working as a volunteer raptor handler to capture the true beauty of the American bald eagle.

The leading product in the American Gold Eagle lineup is the bullion coin. As mentioned earlier, the bullion coin has been the most stable product in the lineup. It has been offered by the United States Mint every year, in all four weights, since its introduction in 1986. The bullion coins have followed a fairly predictable up-and-down mintage flow over the course of more than 30 years of availability.

Mintage figures again dropped back down until 2014, with 2015 and 2016 both posting year-over-year gains in mintage. Most American Gold Eagle bullion coins are available at this time in BU condition from JM Bullion. A coin in BU condition exhibits no signs of wear and tear, though you may notice minor flaws ranging from breaks in the luster and spotted surfaces to contact marks from the coining process.

History of the American Silver Eagle

The first American Silver Eagle coins from the United States Mint were issued with 1986 date marks on the obverse side of the coin. The Silver Eagle program consists only of a 1 Troy oz silver coin with .999 purity and a face value of $1 (USD) backed by the federal government. The US Mint uses images of Lady Liberty and the American bald eagle on the obverse and reverse sides of the coin, respectively. The designs never change and the only variation in the coins is the use of a mint mark on the reverse side of the proof coins.

American Silver Eagle coinage consists of uncirculated, proof, and burnished options. The uncirculated, or bullion, coin has been available every year since 1986. The proof Silver Eagle was also issued immediately in 1986 with the uncirculated coin. The proof coin did have a production interruption in 2009 as the US Mint was forced to suspend collectible coinage production to redirect all silver blanks to the uncirculated program to meet the intense demand for silver at the time. Burnished coins were introduced as a second collectible option in 2006 on the 20th anniversary of the coin program. The burnished coin was suspended in both 2009 and 2010, but has since entered back into production.

Design of the American Silver Eagle

All versions of the American Silver Eagle coin share the same design elements. On the obverse side of the coins, you’ll find Adolph A. Weinman’s historical depiction of Lady Liberty. Created in 1916 for use on the nation’s half-dollar coin, this vision of Liberty depicts her figure in left-profile relief as she walks toward the setting sun on the horizon. She carries the oak and laurel branches in her left arm, holds her right hand outstretched toward the horizon, and wears the American flag over her shoulders. “Liberty” is engraved above her head, with the date mark at her feet. At her heels is the national motto of “In God We Trust.”

On the reverse side of all Silver Eagle coins is the image of the heraldic eagle of the United States. Some version of this design has been used on American coinage since the very first coins were struck by the original Philadelphia Mint in 1794. This particular design is a modern, powerful depiction of the bald eagle with its wings spread wide and the national shield on its chest. The bird clutches the arrows of war in one talon and the olive branch of peace in the other. In its beak is a ribbon with the phrase “E Pluribus Unum,” and above its head is a cluster of 13 stars arranged in a triangle. Each of the stars represents one of the original 13 colonies in America. Engravings on this side include “United States of America” and “1 oz Fine Silver One Dollar.” For the proof and burnished versions of the coin, you’ll also find a mint mark on this side of the coin. There is no mint mark for bullion coinage.

For the first time in the history of the American Silver Eagle, the United States Mint has unveiled a change in the design of the coins in the silver and gold range. After an exhaustive comparison of as many as 34 different designs to possibly replace the John Mercanti image of the heraldic eagle. In the end, the US Mint and the Secretary of the Treasury selected a design from Emily Damstra that reimagines the American bald eagle on the reverse. The new design for the coin’s reverse starting in 2021 includes:

The release of a new design on the reverse of the American Silver Eagle and American Gold Eagle in 2021 is not random. The 2021 release of the coins marks the 35th anniversary of the series and marks the perfect time for the US Mint to transition the visuals on the coin to help the Silver Eagle continue to dominate well into the 21st century.

Please note that these designs will not be available right away in 2021. Due to the COVID-19 pandemic in early 2020, release schedules at the mint were thrown into disarray. As the 2021 production schedule starts, the US Mint will issue 2021-dated Silver Eagles with the existing design of the heraldic eagle on the reverse with plans to replace it by July 2021.

Difference Between Proof and Burnished

The uncirculated coin is an investment-grade coin with a slight shine to the finish of the coins, but it otherwise possesses no remarkable visual brilliance. The proof and burnished coins are both collectible options that do have visual brilliance, but they are produced differently and have slightly different visual aspects. The proof coin has frosted, matte elements on the images of Walking Liberty on the obverse and the heraldic eagle on the reverse. The background of the proof coins is mirrored and clear in appearance.

The burnished coins have a slightly different appearance. The coins are first rolled in a drum with a polishing material that burnishes the coin, adding a distinct visual brilliance that is somewhere between that of the bullion coin and the proof coin. Each burnished coin is carefully handled by employees wearing gloves. Each blank is removed from the drum by a gloved hand, individually loaded into the coining press and struck, and then individually removed and packaged immediately to prevent any chance of human skin oils or other elements tarnishing the visual appeal. 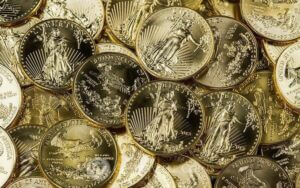